Now it's the winter break for us and for Aglaya. Everything below and on deck is well stowed and supplied. Our boat is well secured with ropes, because despite of the mild winter weather there are strong winds and heavy rain from time to time. On the last day before our journey home to Heidelberg we put on and fastened the big winter cover.

Our neighbours, who spend the winter on their boats, will keep an eye on Aglaya. So we can say goodbye and start our journey home. The fact that we are leaving on the day immediately before the nationwide Corona Lockdown in Greece is more of a coincidence, but for us it's lucky. The ferry brings us from Patras to Ancona.

Then we drive through night and fog non-stop through Italy and Switzerland. The streets are empty. So we get through well and on 8.11. early in the morning we are back at our other home. Here it is also beautiful! But we are already looking forward to getting back on board next spring.

Last year we already went with Beatrix and Peter to the ancient shipyard on the peninsula west of the lagoon town of Aitoliko. We are going there again, because Oinádái was a whole ancient city with an amphitheatre and a city wall. We take another detailed look at it and discover interesting things in the fauna, for example oaks, whose acorns are up to four times bigger than we know them from Germany. And once again we are all alone in the area.

As we ask ourselves again where the access of the ancient shipyard to the sea was, we continue on bumpy roads along watering canals to the coast at the bay of Petala. We drive through a landscape that at first sight seems deserted. But when we take a closer look, we can see that there are people living here who cultivate the land, for example by growing vegetables and cotton (!). Cotton needs a lot of water. That is why we are surprised that cotton is grown in a region where there is a shortage of water in the warm season. Until a few years ago, Greece was among the top ten largest cotton producers in the world, we read on the internet. The rivers from the mountains (here the river Acheloos) have probably always brought enough water. And there is a sophisticated watering system that still works today. We have not been able to determine whether the decline in production is more to do with the crisis, climate change or globalisation. Globalisation will probably be a major factor.

At the bay of Petala we come to the sea. We see wooden houses, there is no one around, everything looks very poor. But the houses are inhabited. What do the people here live on? Probably not from fishing, because we do not see any fishing boats. But there are sheds with goats and sheep and in one place even cows. All the animals are very lean, not like at Home in the pastures. The author Petros Makaris writes in his essays that there was a "culture of poverty" in Greece before joining the EWG/EU. Many people were poor, but they managed to live in poverty in dignity. That has changed, demands have risen and many are living on credit, he writes. But here in this region, which at first glance seems deserted, this "culture" may still exist. We are impressed and touched.

The Peleponnes does not let us go. A little along the Gulf of Corinth we drive by car to Diakopto. From there a narrow-gauge railway (partly as a rack railway) runs through a spectacular gorge 23 kilometres up into the mountains to Kálávryta. Unfortunately we have to note that all trips are fully booked for this day. Therefore we drive by car through a spectacular mountain landscape towards Kálávryta until we reach the monastery Mega Spileon.

The monastery is built on the vertical rock. In 1943 the German Nazis burned it down, in revenge for the partisans of the Greek People's Liberation Army ELAS, who succeeded in capturing 81 German members of the Wehrmacht. These were to be exchanged for Greek freedom fighters. But this did not succeed. 17 children and monks aged between 14 and 88 years died in the monastery. A memorial plaque bears their names and age. The Nazis also raged in Kálávryta. They drove all 1300 inhabitants together, killed all the men, looted the houses and set them on fire. These deeds have not been atoned for until today!

We can always see the route of the narrow-gauge railway at the bottom of the gorge from above. Those who like to hike can take the train to the middle station and then walk down again along the tracks in three and a half hours. The walk also takes you through tunnels and over exposed bridges. This is where a head for heights is required. We would have loved to do that. But the tour by car was also very impressive.

From our current mooring in Messolonghi we see the 916-metre-high Varasova every day - in different weather and light. In the evening at sunset it often shows itself in red - alpenglow. 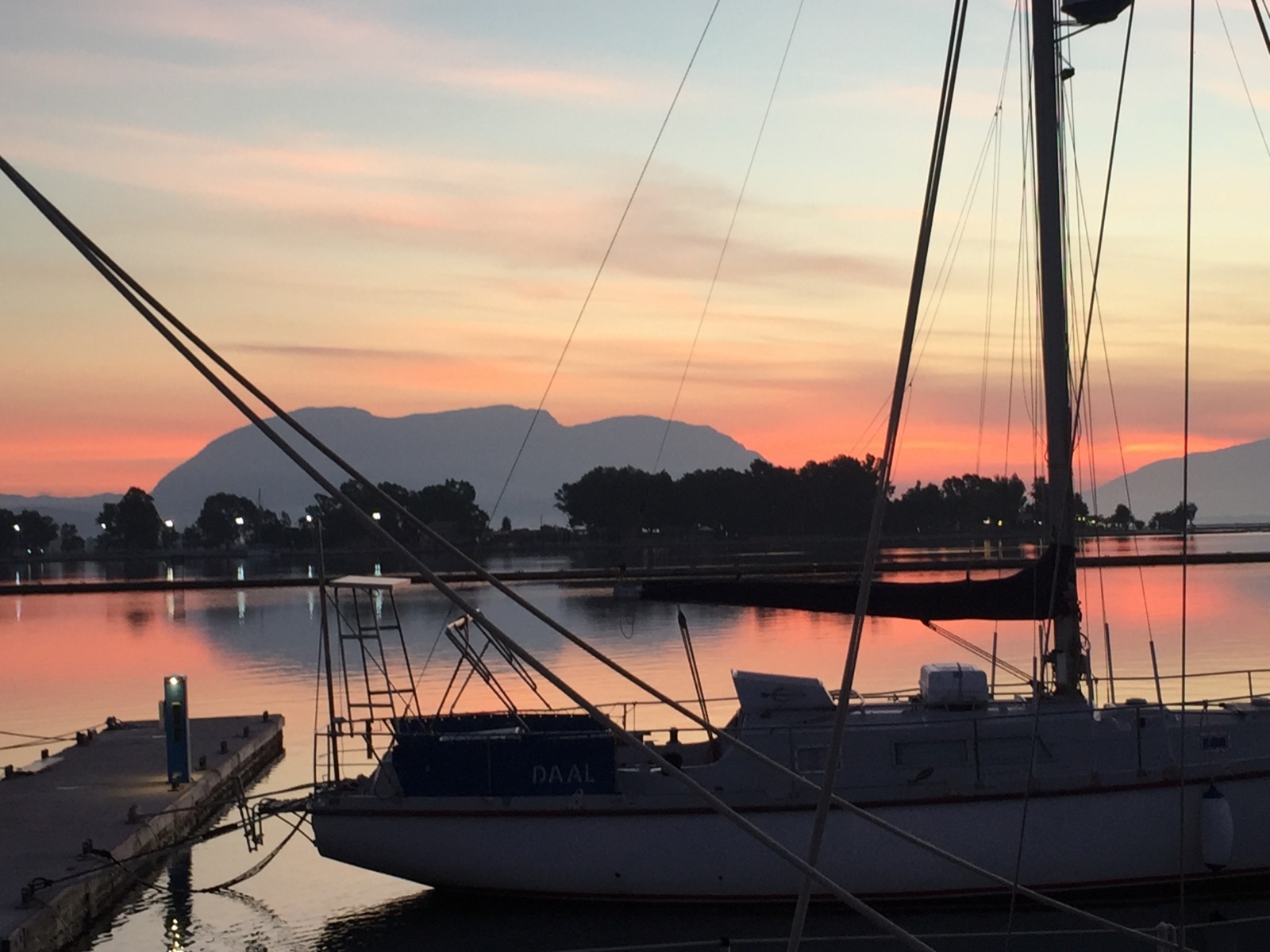 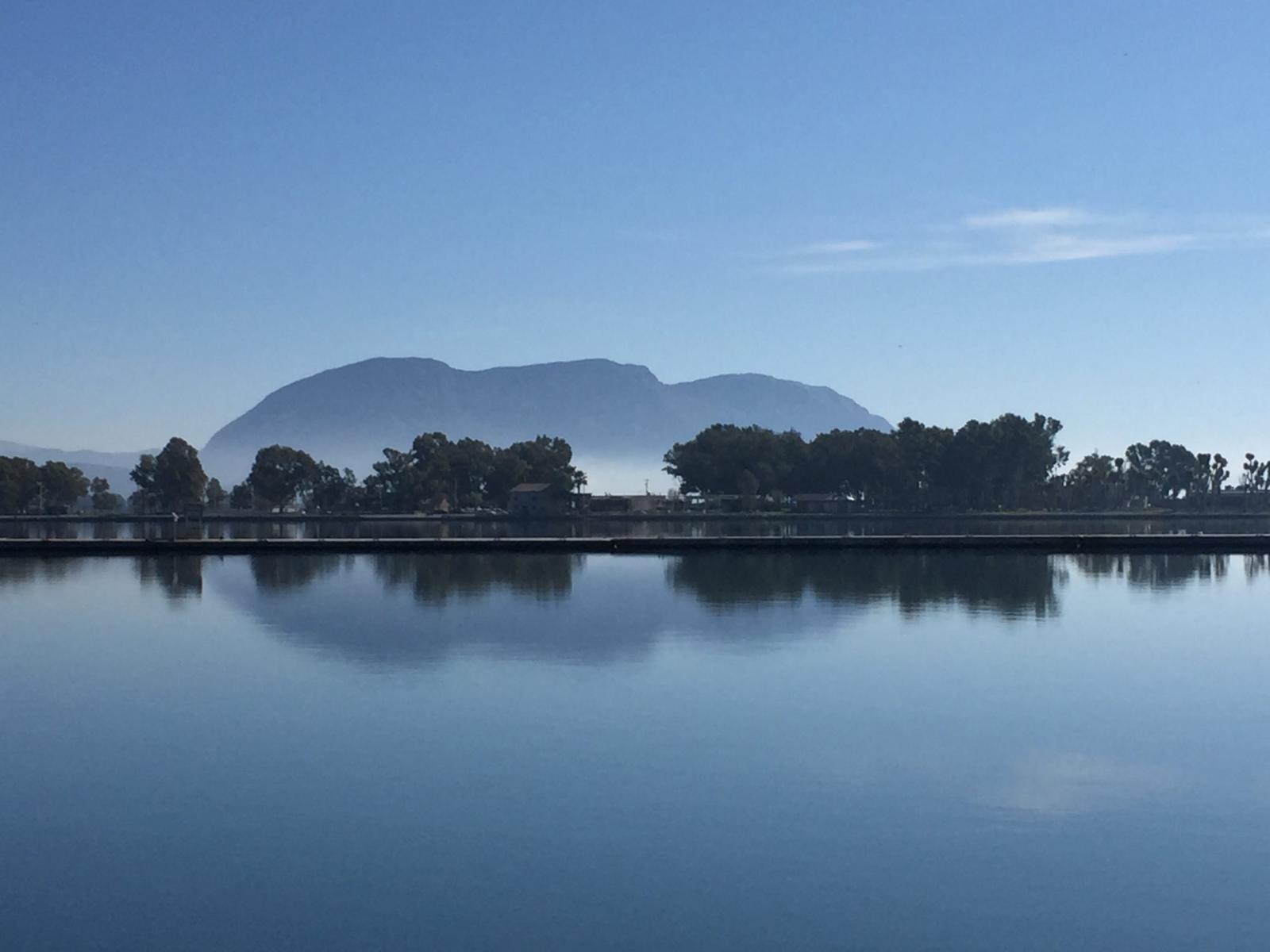 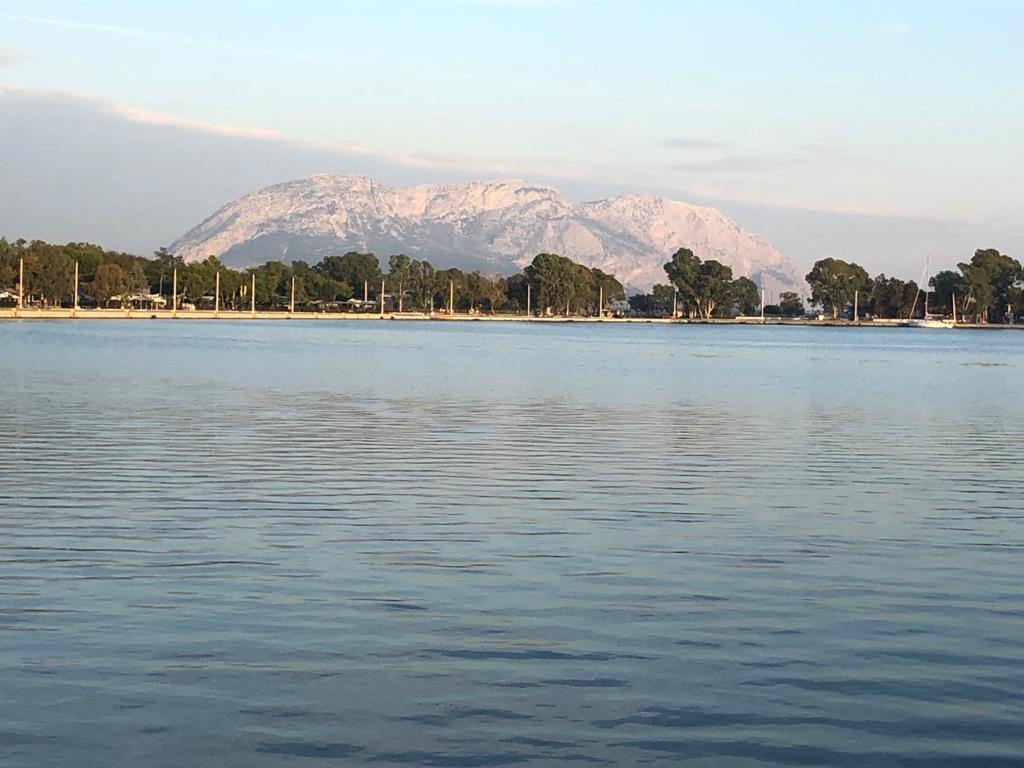 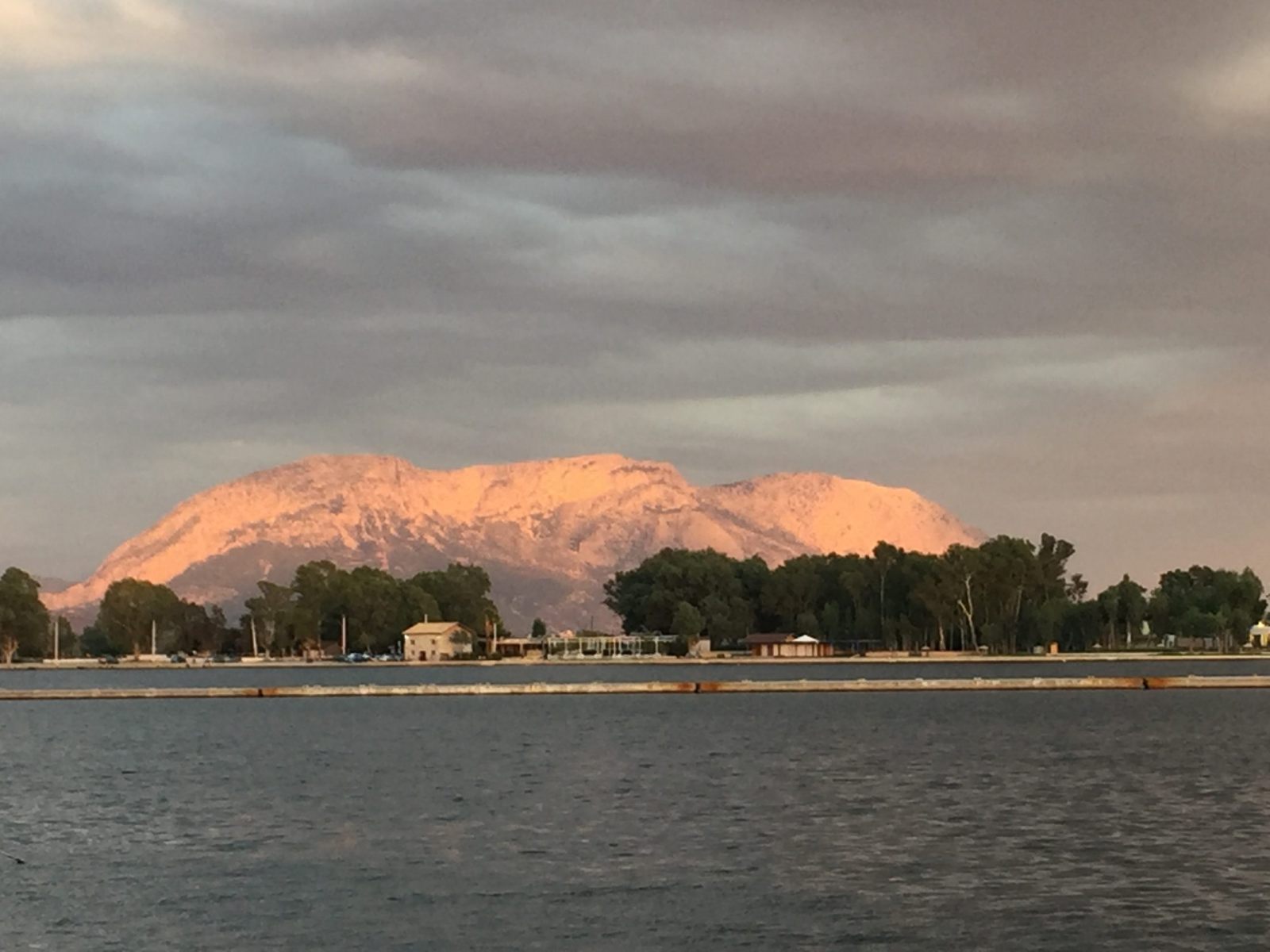 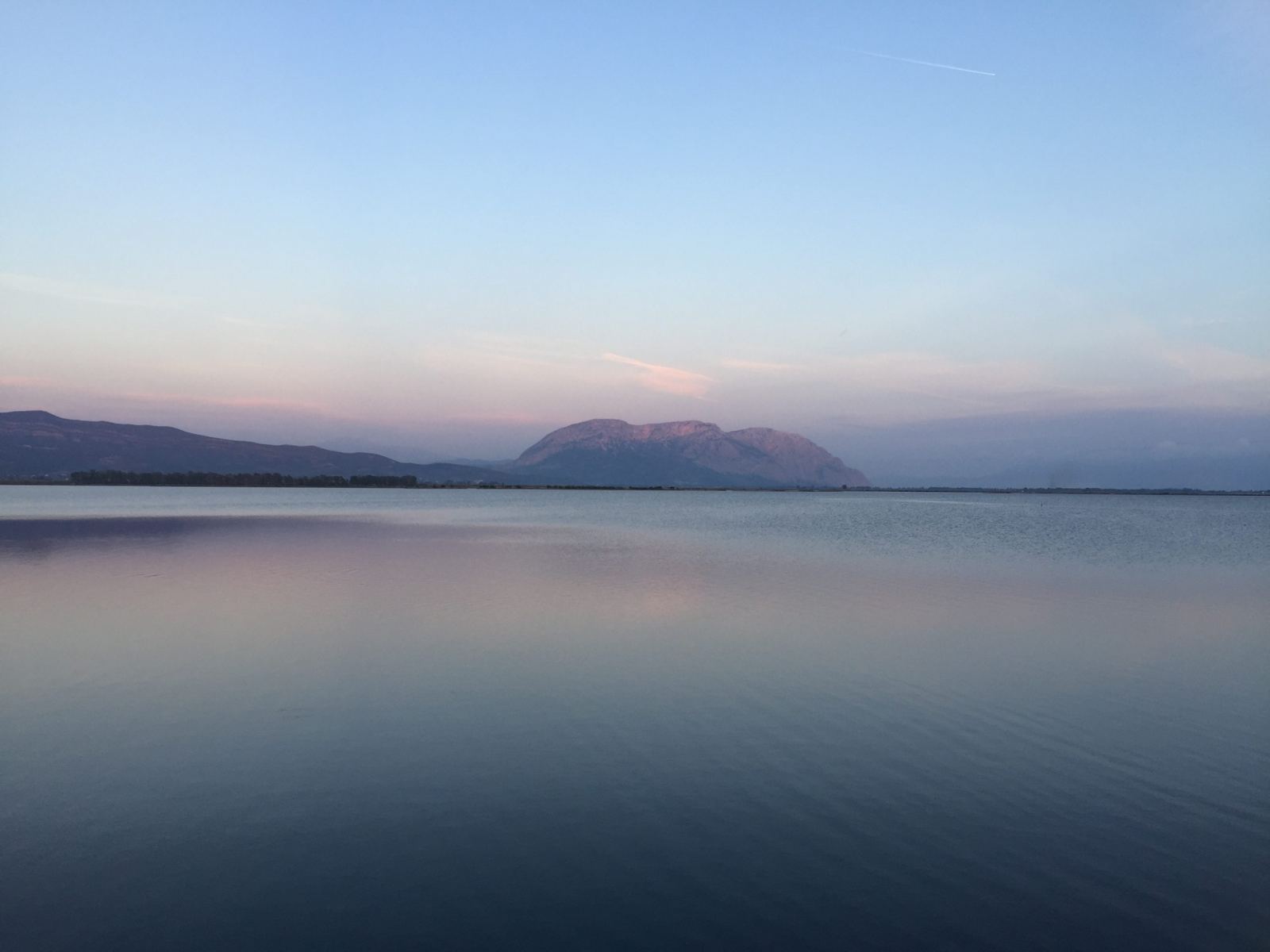 Since we are not only sailors but also enthusiastic mountain hikers, we start from his foot, steeply up 400 meters to about half height. From there on it goes into the steep rock. This is only something for experienced climbers, that we are not. Our destination is a small chapel. From there we have a wide view over the Gulf of Patras and the plain around Messolonghi. Up here we feel a little bit like on an alp in the Allgäu. Everywhere autumn saffron blossoms in violet and white, cyclamen and many other flowers. A sea of flowers, wonderful to look at after the dry summer months. After the descent we enjoyed a cool beer at the foot of the rock in Kryoneri.

Many sailors leave their boats in the marinas in Prevezza in winter. We want to take a look at this and combine it with a visit to the sailmaker, who will make us a new genoa over the winter. The new motorway to Lefkada is not yet finished. So we drive mostly on country roads (with many potholes), but with wonderful views of the Ambracian Gulf. We especially liked the small town of Vonitsa with its harbour and the fortress above.

In the marinas of Prevezza there is every service and many pitches on land. Compared to the familiar, idyllic and quiet marina in Messolonghi, which does not have a licence for work on the boats at the moment, everything here is large and rather impersonal. We leave our old genoa with the sailmaker - as a model, so to speak. But he still came to Messolonghi especially to measure our boat exactly. In spring Aglaya's sailing dress will be completely new.

The land behind the lagoons of Messolonghi is wild. A rugged, steep, partly karstified, partly volcanic mountain range with immense rockfalls, vertical cliffs and gorges. We drove to Kato Retsina, a tiny village on a rocky ridge above Messolonghi (see also 'Interesting facts'). Already here you have a tremendous view of the plain, the lagoons and the sea, of course also of the Varasova mountains opposite Patras. We have already been here, because Anatoli has a restaurant here, right on the edge, with this incredible view.

This time our marina neighbours Tony and Pat told us about a Wanderflugs round Trip, so we drove from Kato Retsina even further up into the mountains, with wild gorges and often distant views of the sea, the southernmost Ionian islands of Kefallonia and Zakynthos. The roads were narrow and not in good condition, but that was just a foretaste.

Beyond the top of the pass a huge green valley opened up, bordered by steep green slopes, one feels reminded of Ticino or Piedmont., with old oak treues an früher down chestnut trees. Small villages, goats crawling up the slopes, and the roads getting narrower and narrower. Sometimes the curves right next to the road go down vertically, several hundred metres deep, you almost get dizzy while driving. Of course, the signs are not always very clear, so we turned around several times, because we had serious doubts whether we we were on the right way at all.

To the wide plain with two inland lakes below us we spiralled down in wild serpentines. But this was not the end of the spectacular landscape: After we reached the bottom, we headed southwest again, into a gorge. Redish-white vertical cliffs bordered the road that led through the gorge, which really puts the landscapes of the Karl May films in the shade. We often stopped to take pictures, also because the evening sun created a wonderful strong reddish light.

After a sailing season there is a lot to do to make sure that the boat with everything on and in it is well looked after and maintained for the winter break. The sails are well packed. On deck all metal parts are cleaned and polished. The wood also needs care. However, we save the oiling of the teak deck for spring. The anchor has probably scraped rocks from time to time. So its tip is rusty and has to be sanded down, reprimed and painted. Dirt and dark stains are removed from the hull. Everything is checked for small damages and the functionality. Especially the engine needs attention. The two diesel tanks should be almost full and a remedy against diesel plague should be filled in. Oil filter and oil are changed and the V-belts are tensioned. A small leak in the cooling water system must be sealed. John, the sailmaker, comes from Prevezza to take the necessary measurements for a new headsail. And a bigger washing action is due. Luckily, even in the second half of October the sun often shines so intensively that everything dries within a few hours. It's a bit like a big cleaning action at home. You sit there afterwards with a glass of wine and are happy about your shiny home.

Wissenswertes/ Worth to know