Elymnion: A nice cosy place climbing up the hillside with a small narrow fishing harbour

Loutra Aidispou: A spa town with hot springs. Many hotels, but many of them are empty because of the crisis. A bath in the 70 degree hot springs: wonderful. In the harbour we are the only sailing boat.

Oreoi: On the north side of the island overlooking the mountains on the mainland. There are many sailors moored here, there is a boatyard and mechanics - fortunately, because we still have dirt in our fuel system. The pump and lines could be cleaned here. At the nice grocer Vassily we get what we need for the pantry and all the information we need.

On our way north we pass the Petalian Gulf, between Attica and the island of Euboea, and then the southern Euboean Gulf. At its northern end comes an area somewhat difficult to navigate, with many flats and few navigation marks until we are in the southern harbour (a large bay) of Chalkis. The equalisation of water levels between the southern and northern parts of the strait leads to chaotic currents and whirlpools, the laws of which even the city's greatest son, Aristotle, could not figure out. We know that we have to wait in front of the strait in the south, pay the 35€ for passage and then wait again, at anchor, because the bridge over which the main route from Attica to Euboea passes only opens at night between two and three o'clock.  The harbour master decides whether the current and wind allow passage. We are supposed to be on standby (with four other boats) from 9pm.

Even the approach to the office in the afternoon is a challenge: loud whirlpools around the boat, the current constantly pushing the bow to the left and right, a real cranking at the wheel. Then we lay at anchor and wait. We are to be informed via channel 12. Greek conversation between cargo ships and timid English enquiries with a French accent as to when we could set off did not really create the right mood.

Until shortly before two o'clock we get the message that we should get ready. So anchor light off, position lights on, start the engine, pull up the anchor. And wait in slow big circles in front of the bridge. We must have come a bit close: "Aglaya, Aglaya, stay in your position, there is enough time" we hear on channel 12.

Finally it starts, at half past two: the two halves of the bridge push into the bridgeheads, we pass through with other boats - no wind, no current. "What a nice boat" the bridge keeper calls out to us. The guidebook says the strait is 40 metres wide, but we are sure it is no more than 25.

Behind the bridge into the pitch-dark northern harbour, after a pair of red-green illuminated buoys, everything is just black. A few lights and the electronic sea chart from Navionics help us to find a large, shallow anchorage. At four o'clock we have an anchor beer and then sleep in the saloon for anchor watch.

Last summer, the big fires on the island of Euboea were also in the news in Germany. Large areas of beautiful vegetation fell victim to the flames and many people had to fear for their homes.

Now we have arrived at the south coast and moor in the harbour of Karystos - a place at the foot of the Ochi mountains. Only a few sailingboats are moored in the harbour, but fishing and fish farming are obviously very important here. Hardly any tourists, only Greeks, many small shops for everyday needs. Everything is relaxed and cosy. A place to stay. Here we recover from our devil's ride against the north wind. Freshly caught dorado for dinner, talking to the few neighbours on the other boats, just taking it easy until the strong north wind stops.

But then we continue north, along the west coast of Euboea in the Petalian Gulf. It's a good thing we discovered it: Ormos Boúfalo (Buffalo Bay). There's an ancient story about the name of this beautiful little anchorage, but that's going too far here. Some sailboats are already anchored when we arrive, but we find a place right next to the sandbank that juts into the bay. We have the feeling that we are lying in a small fjord. An idyll and a quiet night.

There has been a fierce north wind here for weeks. And we want to go north. After spending three nights on the beautiful island of Kea (see photo gallery). 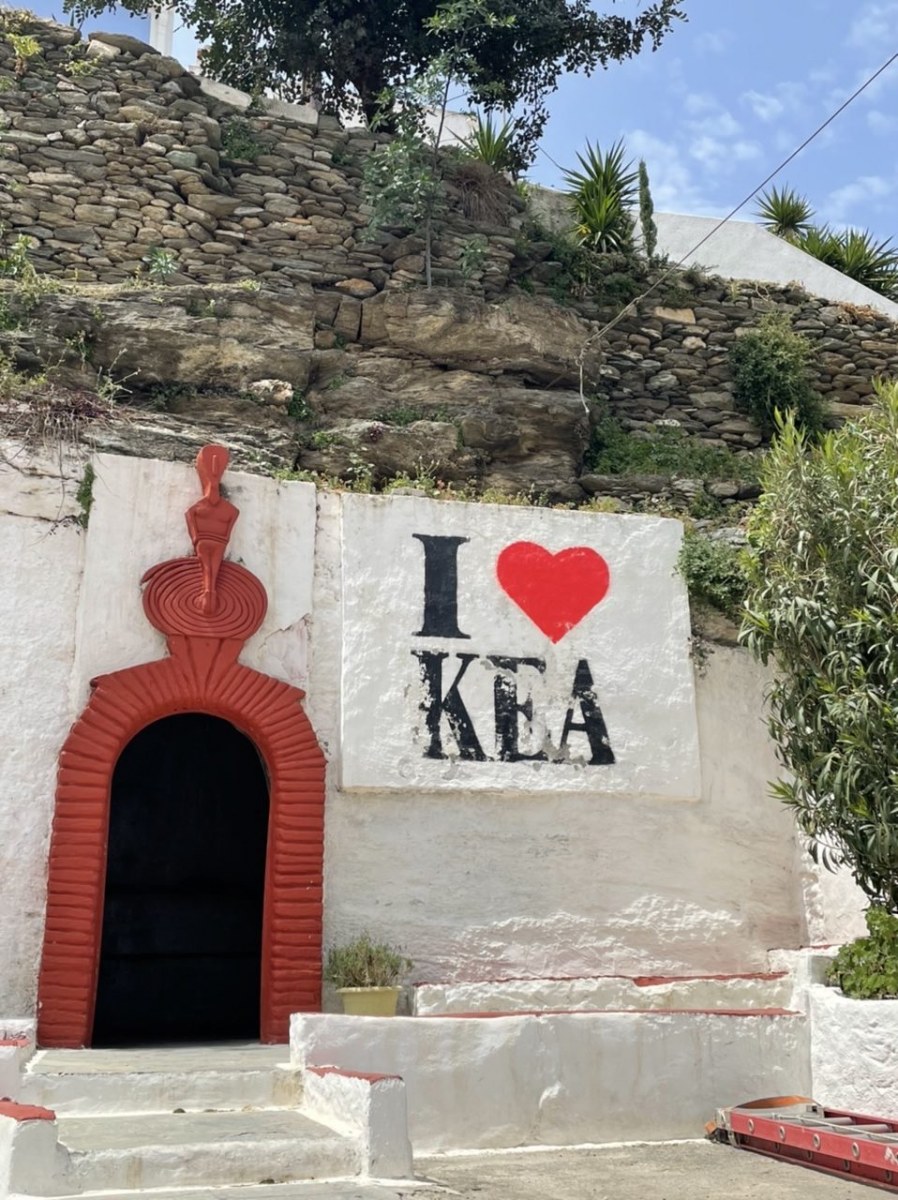 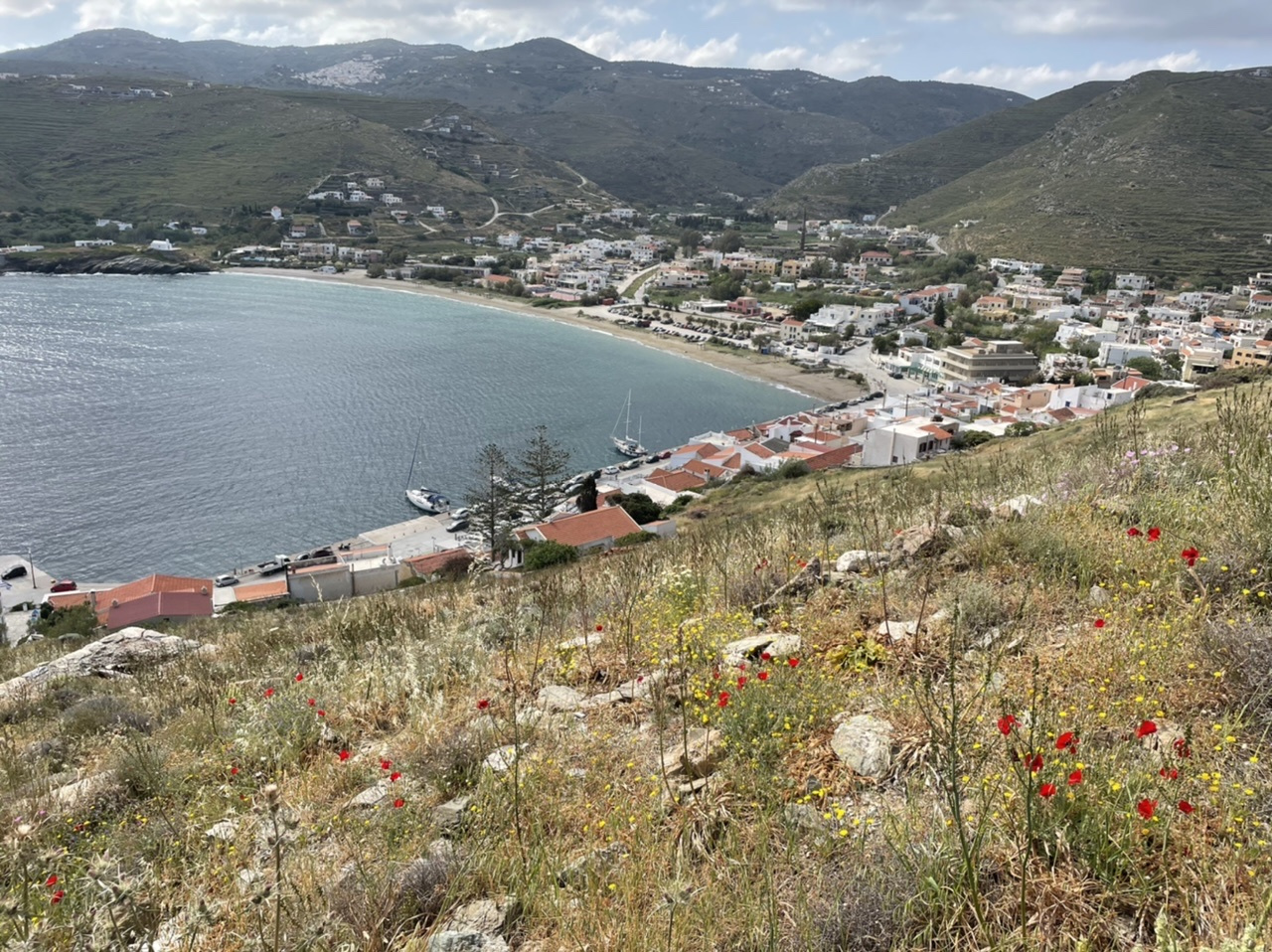 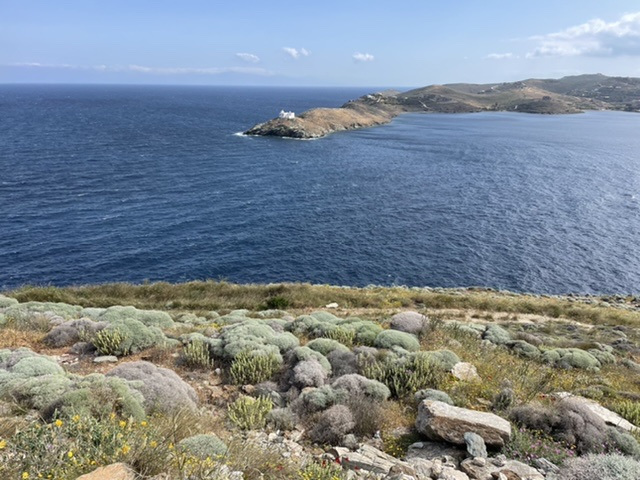 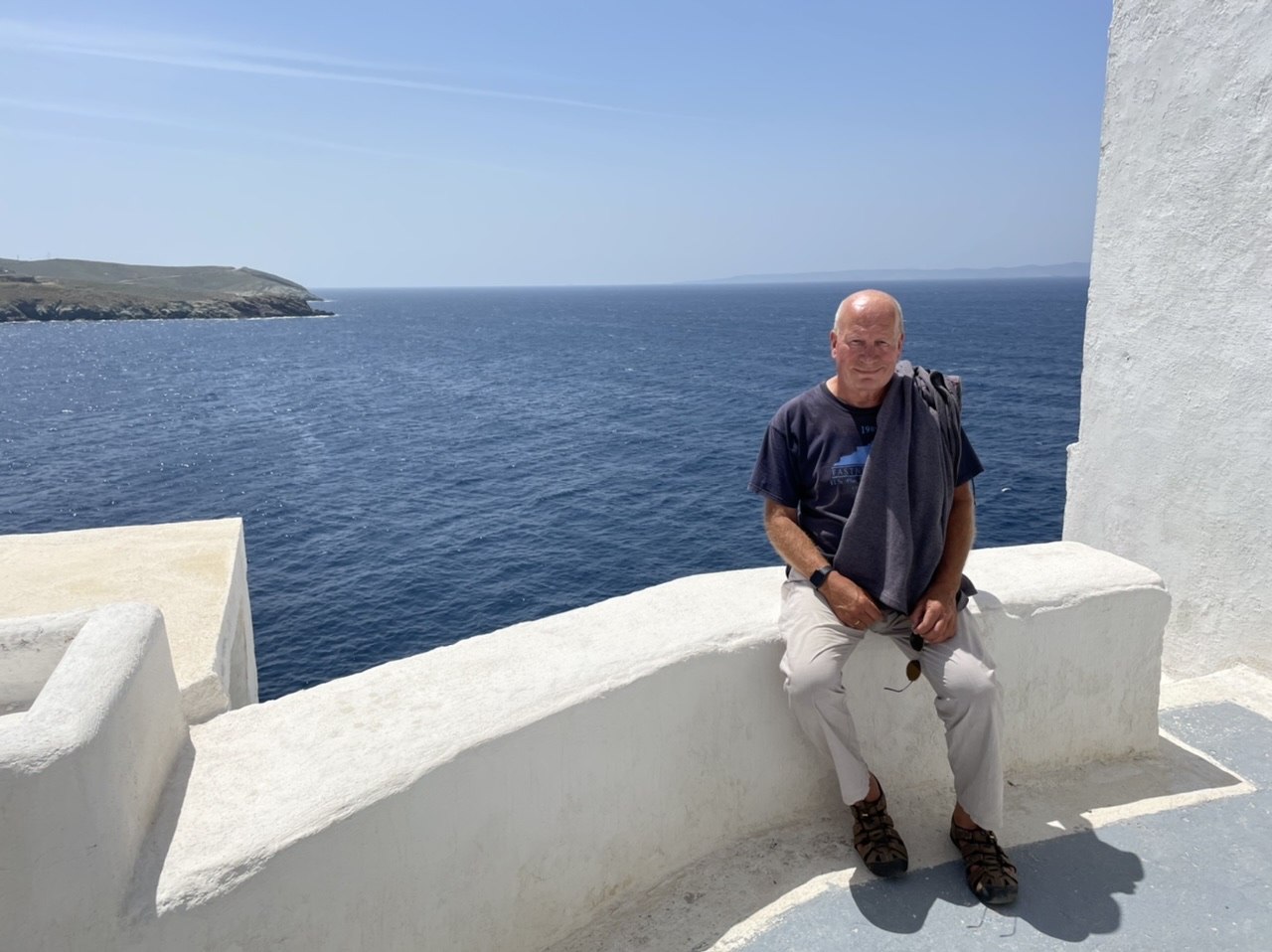 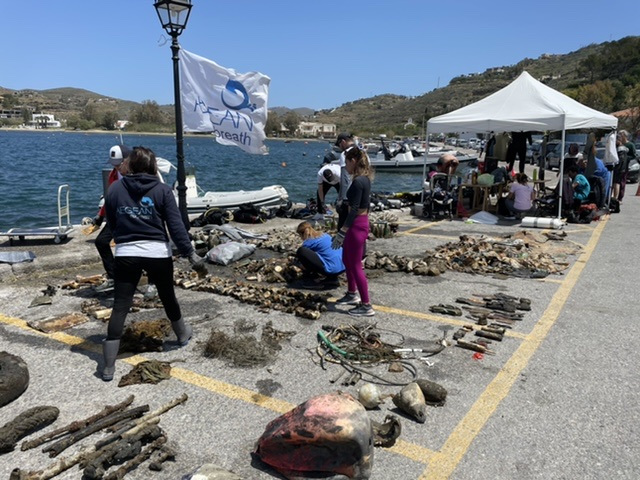 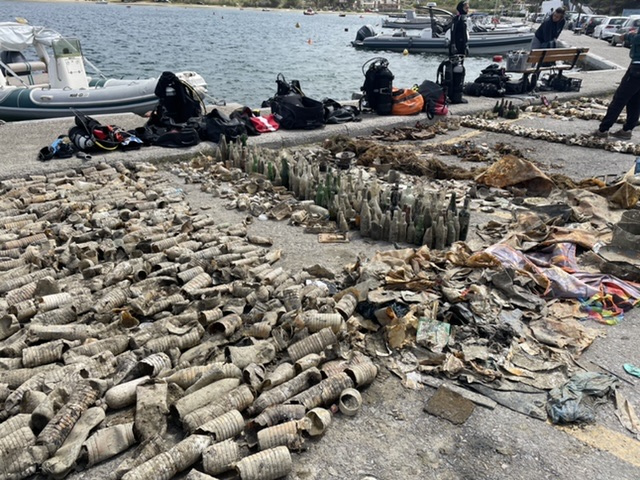 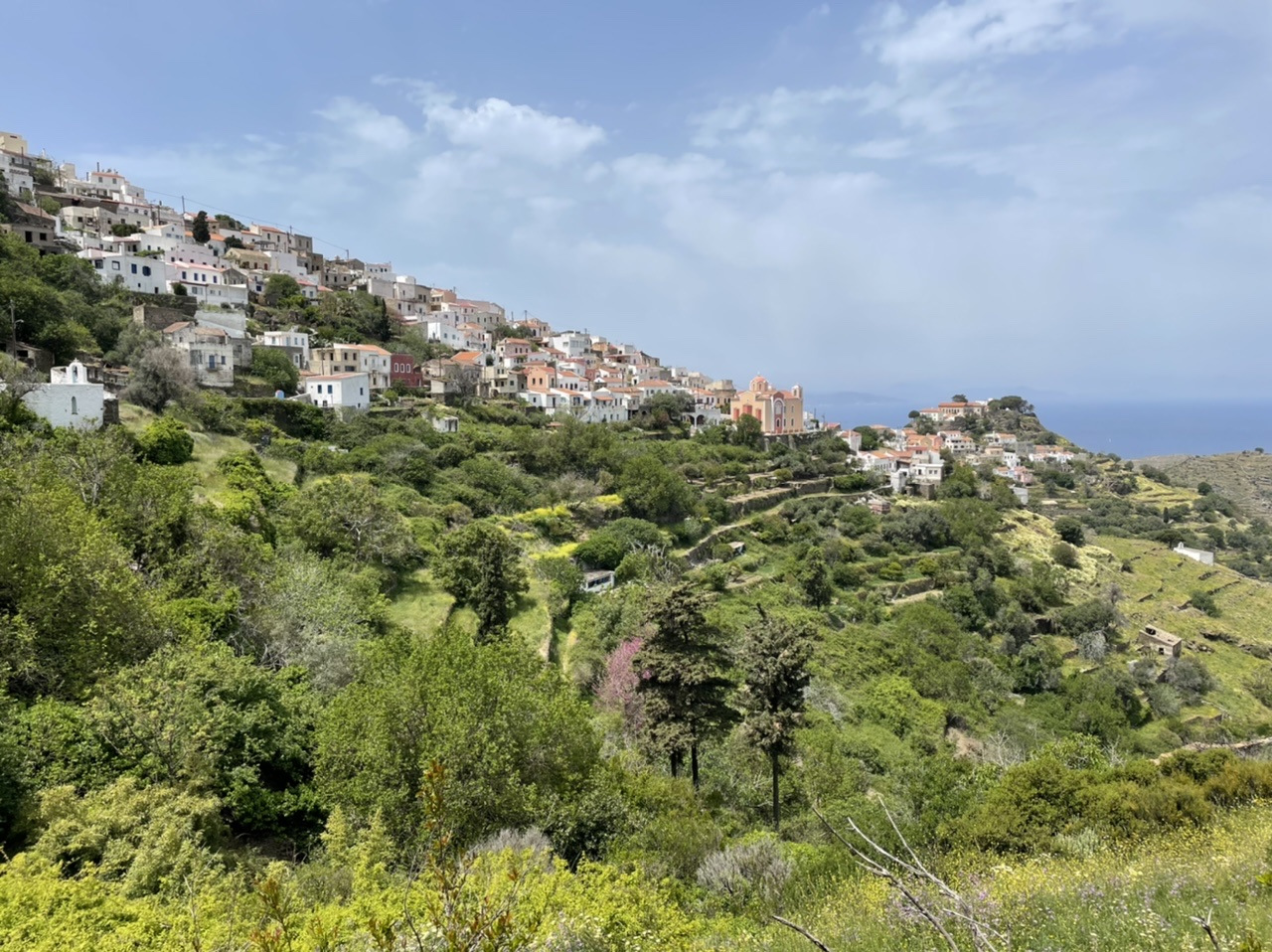 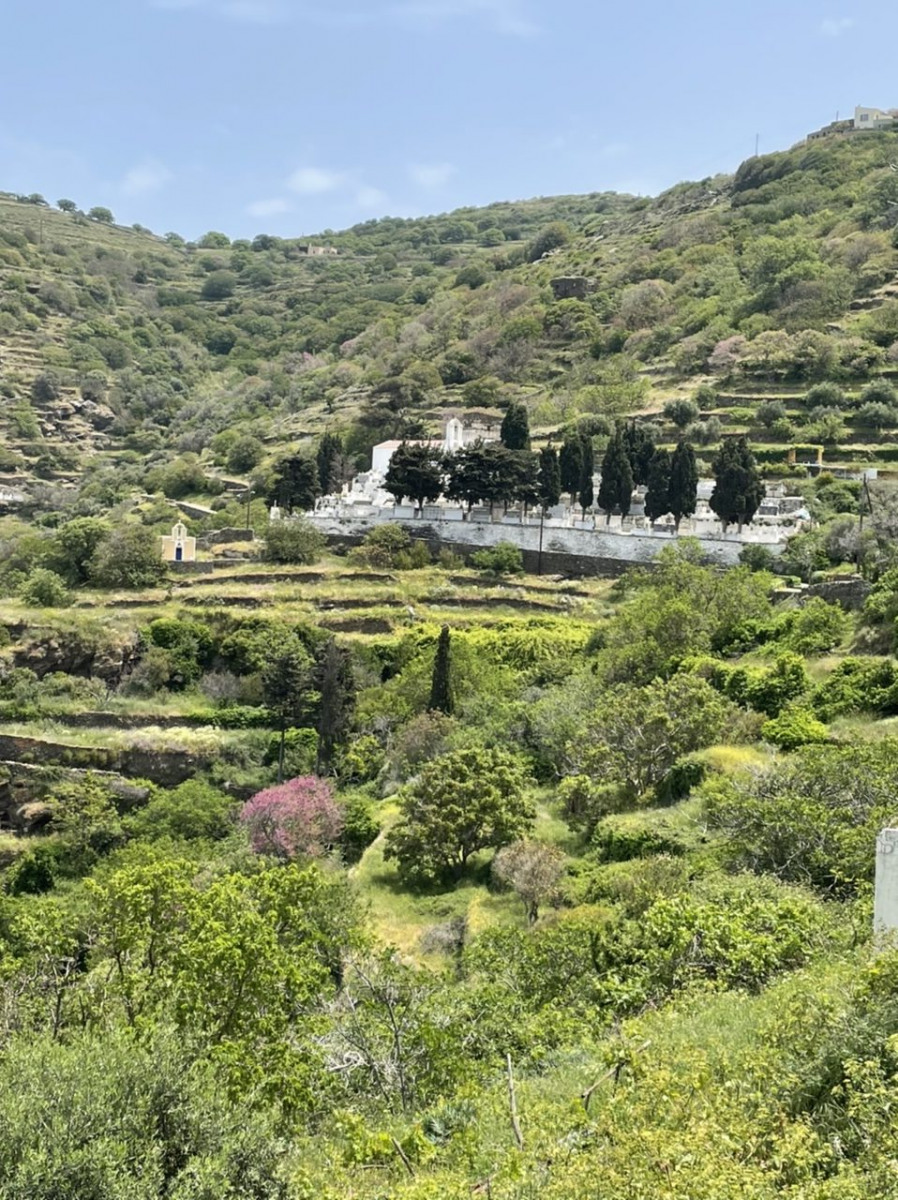 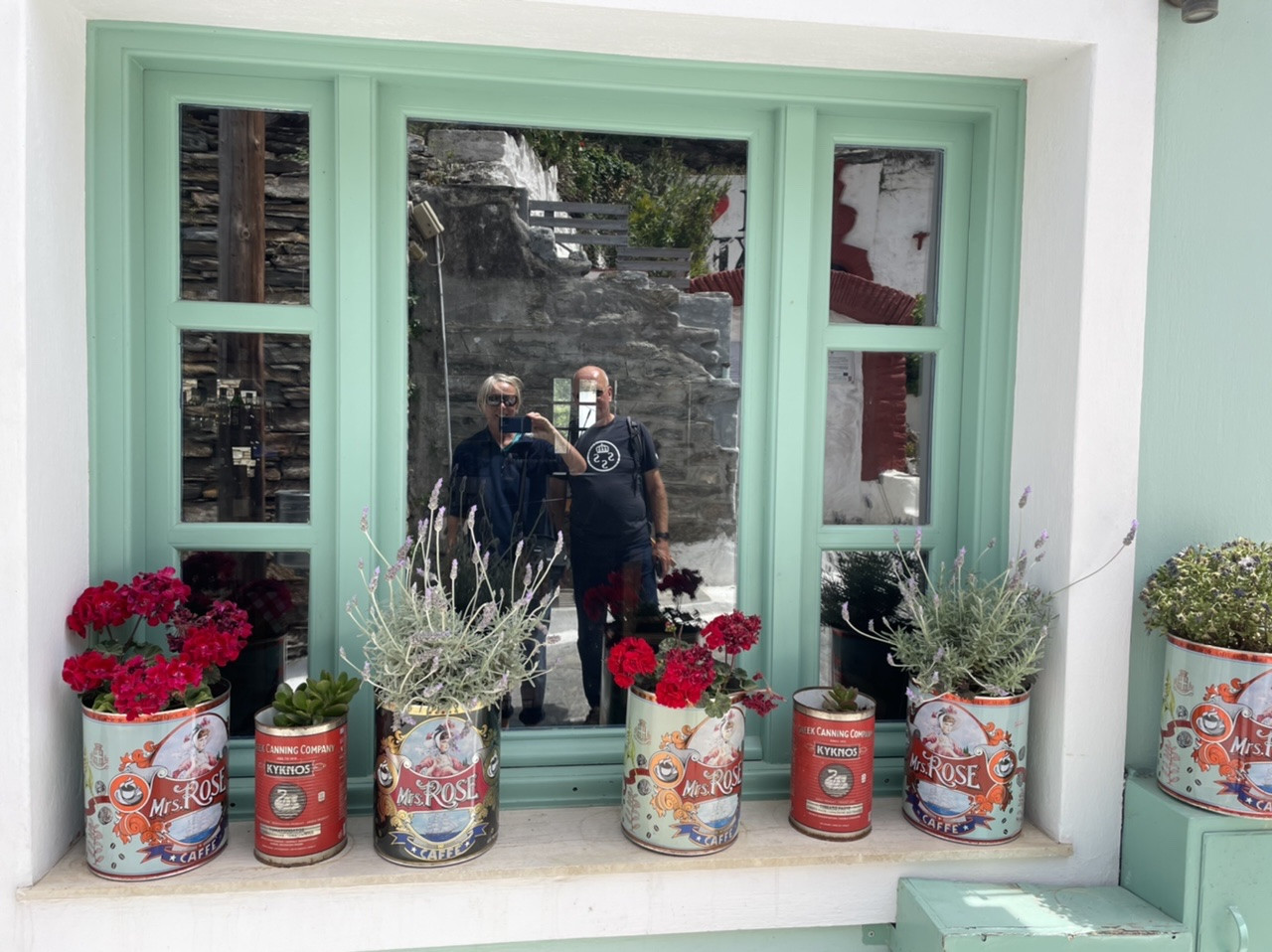 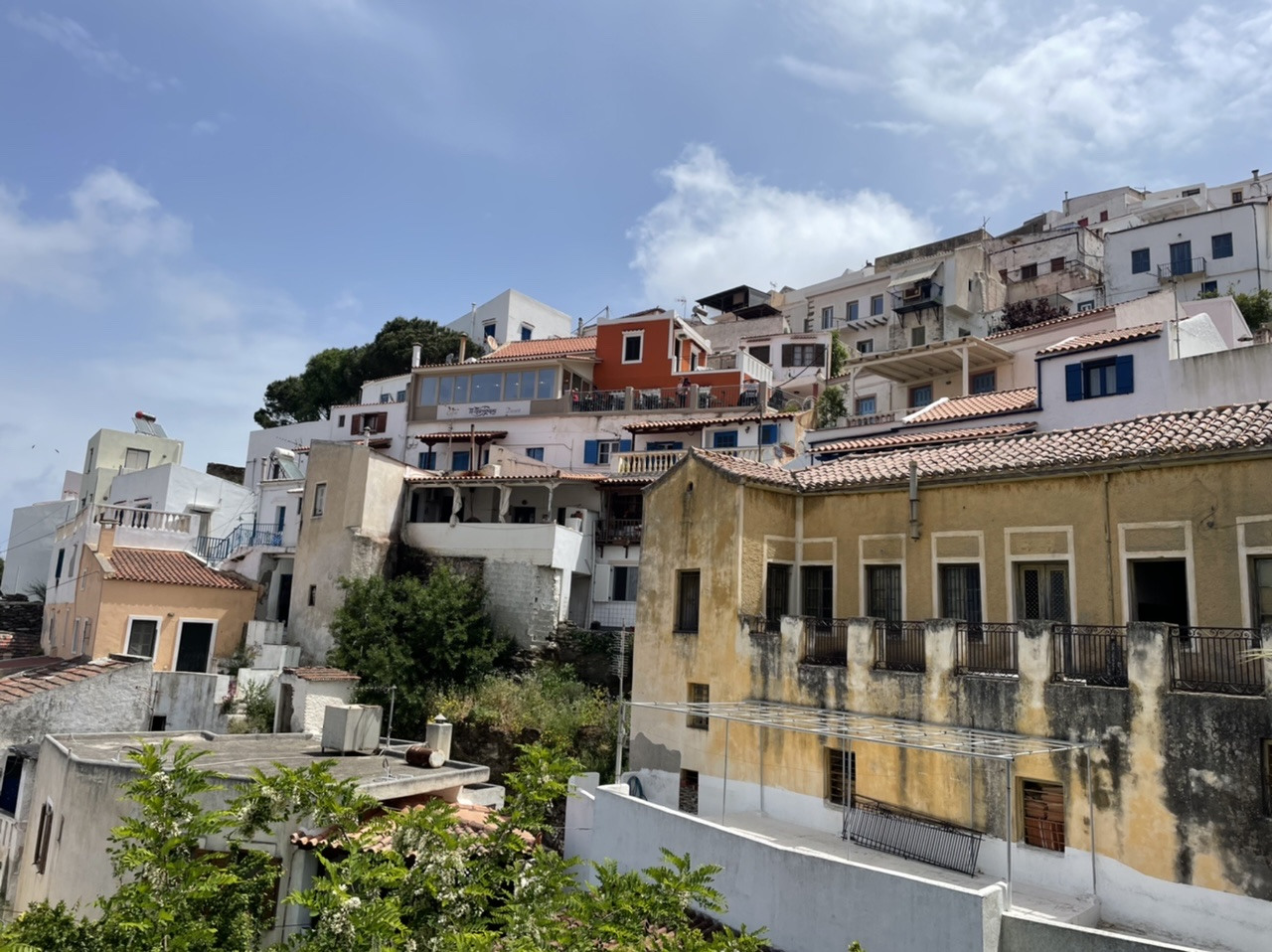 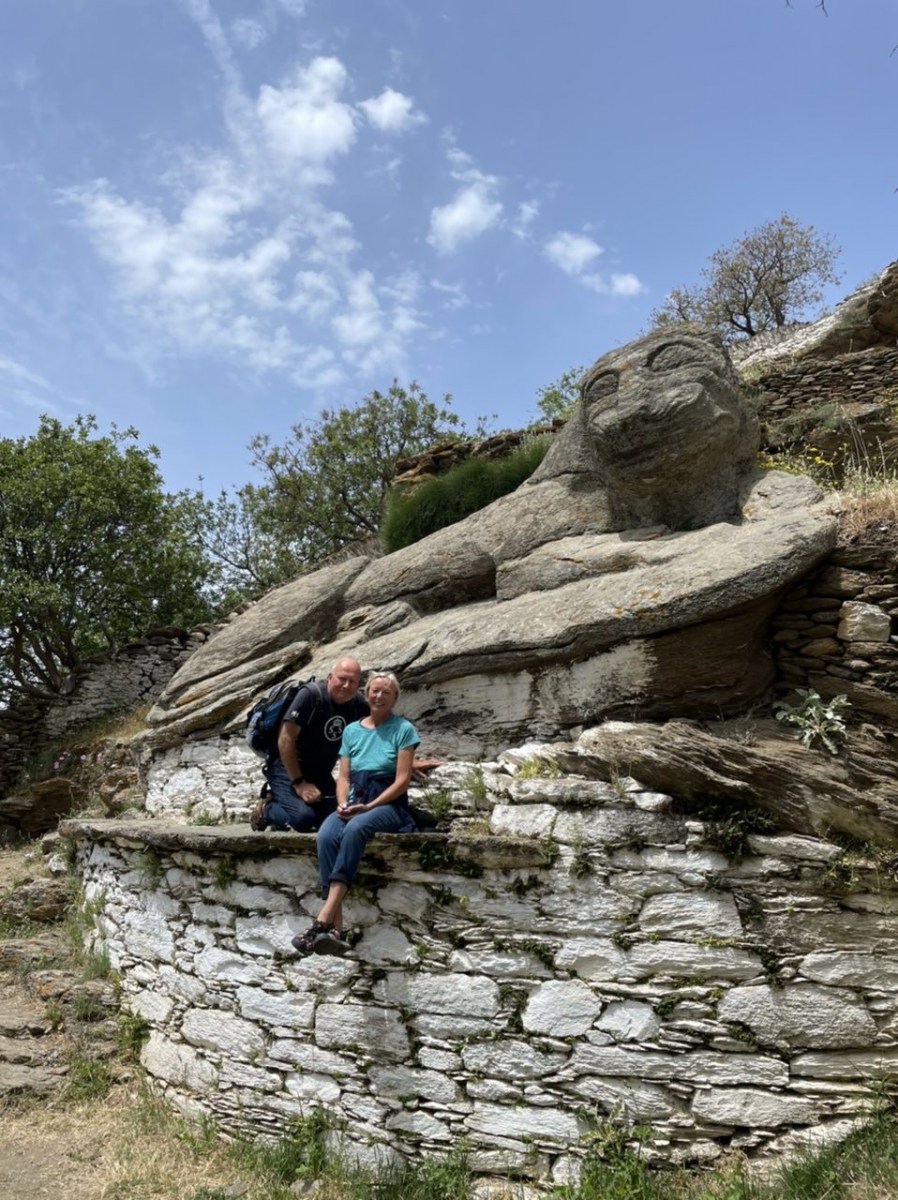 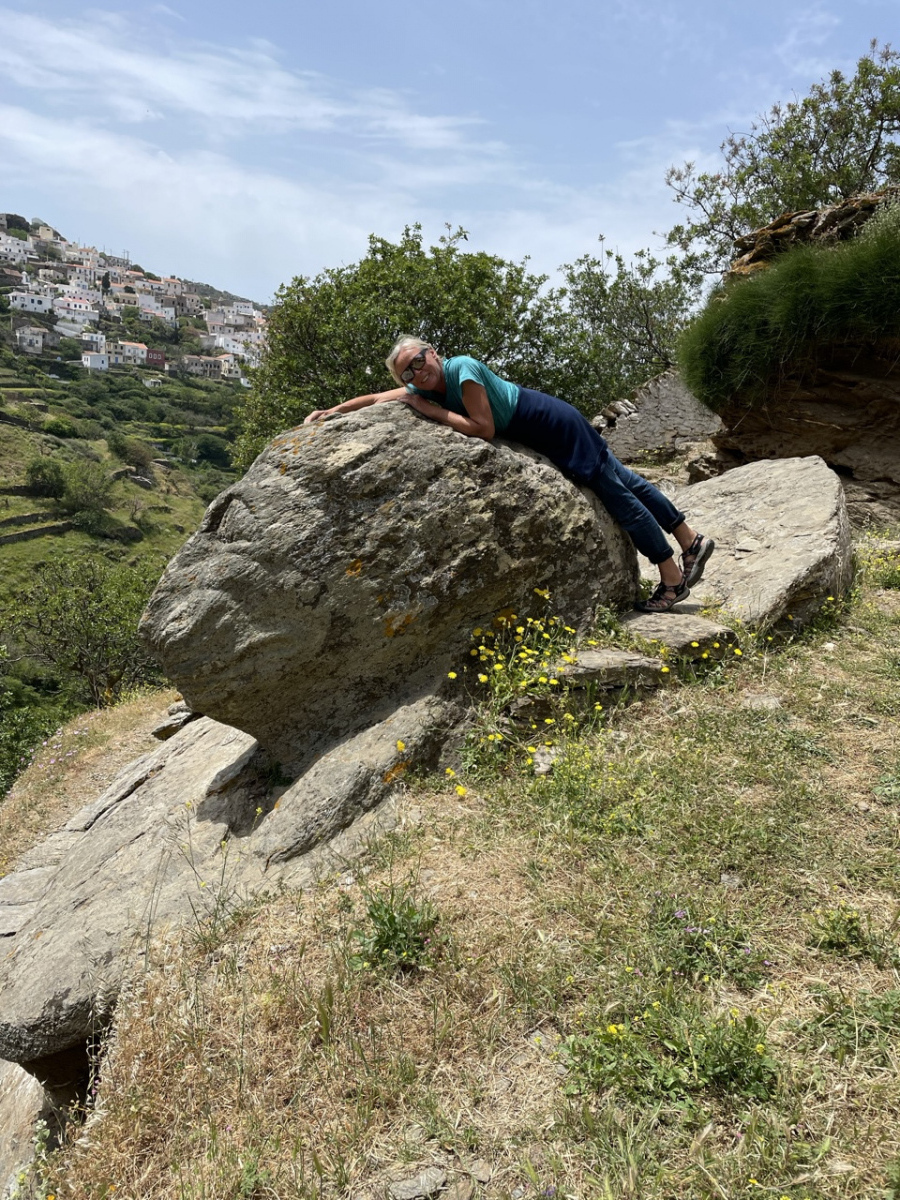 We wanted to venture north to Karistos, on the southern side of the island of Euboea. We know that we have an extremely seaworthy boat with a powerful engine.

So anchor up and cast off in Voukari Bay/Kea. We have a date with friends on the island of Skiathos. It is hazy, no sun, a few raindrops.

As we leave the bay, we are met by a fierce north (much stronger than the wind apps had predicted), permanently 30, later up to 49 kn, i.e. about 8-9 Beaufort. And due to the long-lasting north wind, a high swell with cross seas has formed, which runs directly towards us.

That means: riding a roller coaster. The bowsprit rises up to an estimated three and a half metres out of the water, only to dive deep again, so deep that the luff of the foresail gets wet.

We are glad to have such a seaworthy boat, because the spray when the boat dives tends to fly outwards due to the shape of the hull. Except for a few very high waves, when water comes over and we get showered. With salt water.

And the closer we get to the harbour, the stronger the wind gets, permanently 45 knots now. The boat normally makes 4.8-5 knots at 1,500 rpm, which is quite good - but every time it dips into a wave trough, it slows down very hard.

So we need seven hours for the 20 miles. And after this wild ride, the anchor drops in the harbour of Karisto - in sunshine and sudden calm.........

We have left the Peloponnese behind us: The Messenian, the Laconic, the Argolic, the Saronic Gulf. Then, after a night at anchor directly in front of one of the most prominent points in Greece, Cape Sounion on the southwest corner of Attica, we head into the Aegean. With an unfavourable north-northeast wind, we can still sail for the first two hours, but then we have to motor because the wind - once again - comes from the front and pushes us too far south. So the last eight miles under motor with a heavy rollercoaster swell.

Then we are on the island of Kea, in the north-western bay of Livadi, with strong winds and swell. But we are well moored, with bow anchor and stern line, the pier is high, it is comfortable to get out and have a beer directly opposite in Café Captain Louis - after a long difficult anchor manoeuvre.

Ferries also dock here - but it's not very touristy and the tourists and visitors seem to be locals, very pleasant.

When the wind will stop coming from the north, we head north between Euboea and Attica, towards the Sporades.

Under sails all day in light winds. This is how Walter sails into the Seventies on his round birthday. It couldn't be more beautiful. From Ermioni to Poros. Here we have champagne in the cockpit and a delicious meal at Taverna Karovolos. Lamb kleftiko, hmm …